The only time I’d ridden a Ducati Monster before was during the Asia Ducati Week held in late 2014 in conjunction with MotoGP in Sepang, Malaysia. Having it for 4 days, I rode in the city during rush hour and took a long cruising ride from Ducati center and ended at the Sepang F1 Circuit. Besides the awesome handling in the city which is a standard characteristic of a street bike, honestly, I wasn’t very impressed with the Ducati Monster 795.

After 8 months, I decided to give it another try. But I was not going to go easy on this; I needed something that would blow me away, or else the Monster would remain as a non-favourite of mine. So I went a few levels higher and tried the Ducati Monster 1200 S. 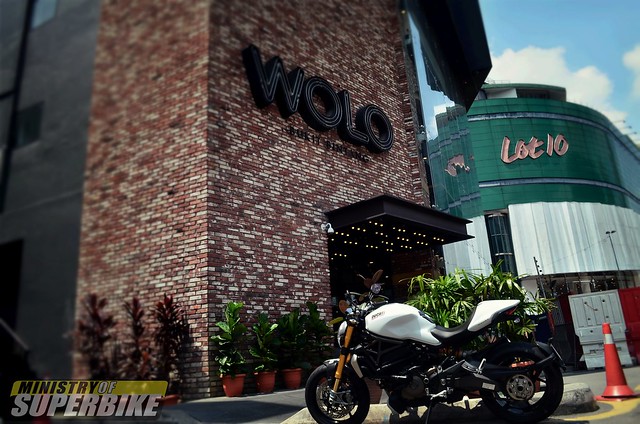 First impressions are that one could easily recognise the Monster with its distinctive bubbly tank and a round headlamp; unless you aren’t a big fan of bikes, else you could easily recognise the Monster even from far. The 1200 S is slightly more muscular compared to its smaller siblings, hence giving you a much more manlier feel. The sleek design from the headlamp to the tail never fails to impress me. Ducati has always emphasized design that lasts. This new Monster 1200 S carries the same spirit and it does make me look twice. You will understand the emotions especially when you notice a hot girl staring at you from her car window as you ride past. The 1200 S shares the same engine as the current Ducati Diavel and Ducati Multistrada, the superbike-derived 1198cc dual-spark 11° V-twin Testastretta engine. The only difference is that it produces lesser horsepower, 145 bhp at 8,750 rpm and 124.5 Nm of torque at 7,250 rpm. It’s slightly lesser but twice the fun on the street. It comes with 3 modes; Sports, Touring and Urban. 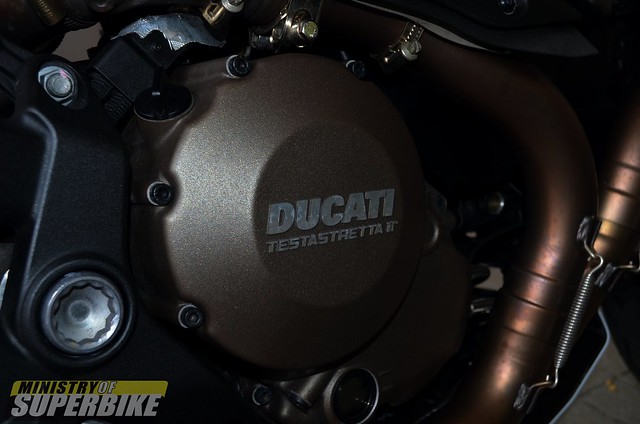 [quote style=”boxed” float=”left”]You will understand the emotions especially when you notice a hot girl staring at you from her car window as you ride past.[/quote]  To bring the 1200 S to a stop, the responsibility goes to the Ducati Safety Pack, which is an excellent combination of Ducati Traction Control and the Bosch ABS 9MP-controlled Brembo brakes. Complementing the braking system is the Ohlins fully-adjustable 48mm usd forks at the front and progressive linkage with fully adjustable Ohlins monoshock at the rear. 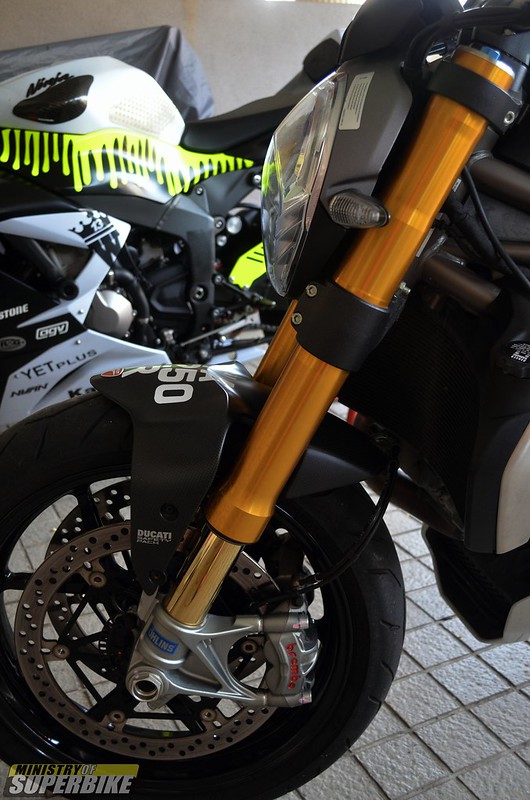 The seating position for the Monster 1200 S leans slightly to the front and it is very comfortable to ride on. My wrist rests well on the handlebar that is now 40mm closer to the rider and 40 mm higher. The dash is very attractive; unlike many dull displays, the 1200 S comes with a TFT screen. The screen layout and design changes with the riding mode. I came across an article some time ago where the author stated that they had some problems with the screen during daytime, but from my personal experience, I didn’t have any difficulties.

Riding in the city with congested traffic is not fun. Imagine having to filter a ridiculously tight space in between Malaysian drivers who mostly can’t be bothered with bikers. It cuts the power down significantly and is restricted to only 100 bhp. 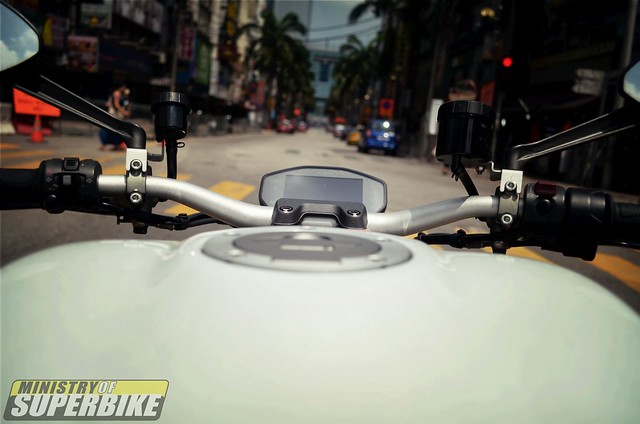 At some junctions where I had to go slow, the bike had significantly less vibration and I could easily throttle off at low rpm in high gear. The bike is extremely agile and the response was quick, so I could easily filter through traffic. The seat height is just right for most Asians and the frequent stopping in heavy traffic was not an issue as both my legs could easily reach the ground.

I took a short break right in the middle of the city and as expected, many passers-by would stop and take a look at the bike. Some even took the opportunity to snap a picture with it.

To try out the touring mode, I took the bike to the national highway. Unlike city riding, the traffic on the highway is smooth, so it was a perfect time for me to check out the fuel consumption. The 1200 S consumed about 18.5 km/l at an average speed of 80 km/h. Although the distance covered is not that far, roughly about 130 kilometres both ways and on the highway, I maintained a constant 140 km/h. I must say that the fuel consumption is quite impressive.

Touring mode offers medium response at full 145 hp. Although I was cruising at 140 km/h, I felt less wind resistance compared to the Monster 795. The seating position made it quite a comfortable ride for a long weekend trip. And of course, the extra horsepower gives you a better feel and not such a dull ride compared to a 795. 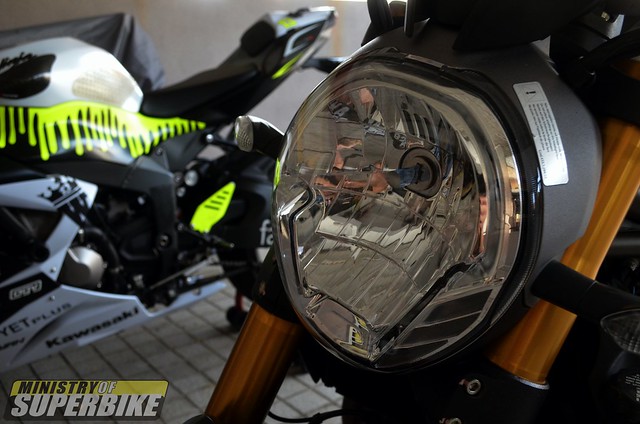 The only flaw I notice is the headlamp. Despite having a huge round luminaire, the light throw doesn’t give the right amount of light required and the light distribution is very bad. I can barely see the ground when riding. However, the high beam works fine.

On the usual lovely Sunday morning, I took the bike on the Ulu Yam Genting route, a mountain pass that our team rides every Sunday. The 1200 S performed way above my expectation. The 50:50 weight distributions helps a lot with the aggressive handling. This route offers a handful of tight and long turns and the 1200 S tackled all the turns with ease. The linear power delivery and low engine vibration on this refined 1198 cc Testastretta 11° L-Twin, 4 Desmodromically actuated valves per cylinder engine impressed me. The power comes at the blip of the throttle and the traction controls works perfectly well, preventing the tail from sliding out in case we overfed the Monster with a little more petrol. 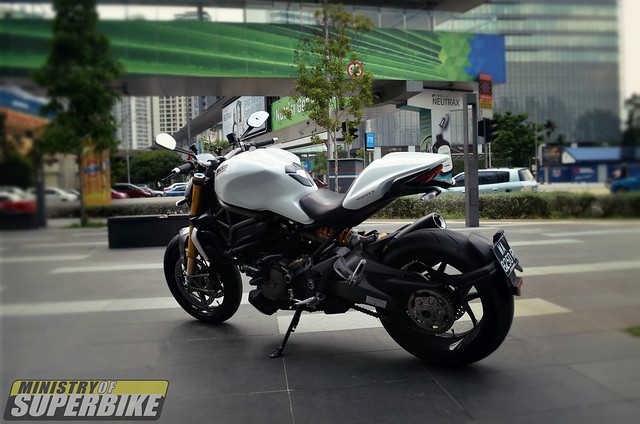 The weekend with this all-new Ducati Monster 1200 S changed my perception towards Monsters. Although I must admit that the street and naked bike is less appealing to me as my DNA is built on sports bikes, this 1200 S gave me a different perspective in European street bikes. I’m starting to like it… unfortunately.