[box border=”full”]Words : Nic | Photos : Nic / Wan of Roda Roda[/box] 40 years ago, Kawasaki introduced the H2 which took on the world with a storm. The then Kawasaki H2 was replaced with the Z750. 40 years later, present time; Kawasaki once again, shocked the world; synonym with its reputation for building scarily fast and good looking fast bikes, the all new Kawasaki H2.

Over the years, not many Kawasaki bikes carry the Ninja name. It is reserved only for special bikes. Although today we have quite a few Ninja on the road, but the H2 is the true Ninja and is the few rare that carries the honoured KHI River Mark, a long time Kawasaki symbol since the founder Shozo Kawasaki was running his shipping business.

Ever since the release of teasers by Kawasaki, since then, information and speculations on the H2 is all over the internet. Kawasaki lips remained sealed on the top speed figure. H2 showcases the latest in engineering technologies, and capabilities of the Kawasaki Heavy Industries. Everything about H2 is developed in house, the supercharger used was designed with assistance from KHI Gas Turbine & Machinery Company and the out of the world aerodynamic design is with assistance from the KHI Aerospace company. The H2 is a class of its own, beyond comparison; at least that is what we think.

From the spec sheets, the Kawasaki H2 has a 200 bhp on the rear wheels powered by a Supercharged Liquid Cooled 4 stroke in-line 998cc engine. The in-house designed supercharger is able to deliver a high-rpm performance and with such efficiency, no large or heavy intercooler is required to compress the air. The complex shape of the impeller spins at 9.2x speed of the crankshaft at a speed of nearly 130,000 rpm, forcing in over 200 liters of air per second into the engine.

It comes with a fully adjustable state of the art KYB racing suspension that will deliver incredible performance and feedback to the rider. The MotoGP style dog-ring transmission allows effortless and short shift. A contactless quick shifter is also built in for a seamless acceleration. To further enhance the control, it comes with the OHLINS electronic steering damper that automatically adjusts its setting based on riding behaviour. 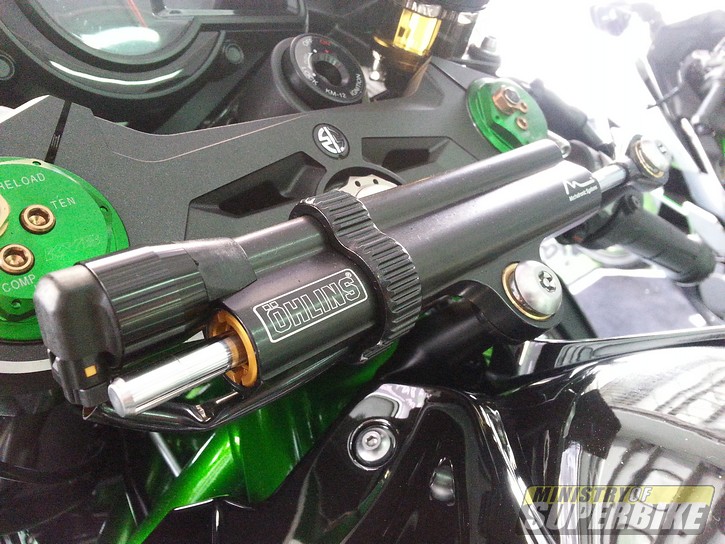 State of the art electronics was included in the H2 package to ensure riders would be able to enjoy its maximum performance. H2 comes with the latest Kawasaki Traction Control (KTRC) that provides 3 different traction modes where Mode 1 and 2 is designed for maximum acceleration and performance and Mode 3 is optimised for wet conditions. I can’t imagine what will happen if it is turned off completely.

Kawasaki threw in the Kawasaki Launch Control Mode which provides 3 unmatchable acceleration mode from a stop that minimize real wheel slip and front end lift. Rider would be able to keep their throttle held wide open at any point of time.

While there are tons of goodies being fitted into the H2, the one that caught my attention most is the bodyworks. The aerodynamic design is mind blowing. The unconventional upper cowl designed comes with a chin spoiler gives me a futuristic feel. It is said that the paint includes a layer of pure silver formed by a chemical reaction creates a mirror finish. . I practically don’t need to carry a mirror to tidy up my hair after I remove my helmet, the mirror coated black paint is the first ever paint job on a mass production bike. In the shade, the H2 gives a deep 3D appearance while under the hot sun; the silver creates a brilliant metallic finish. 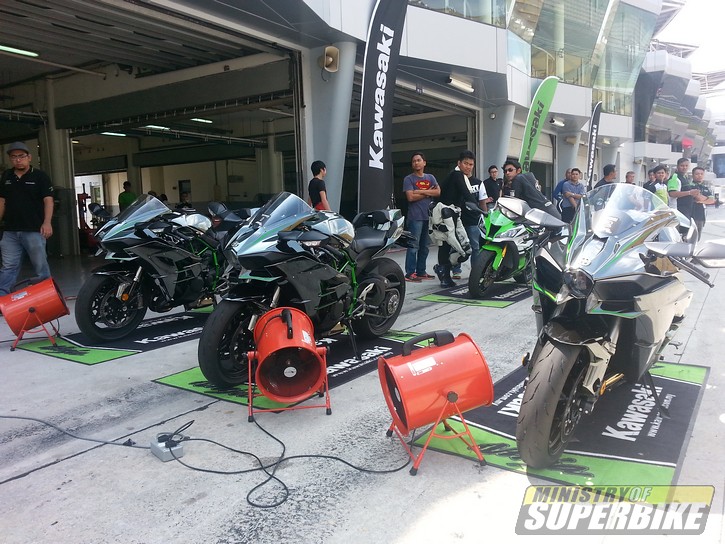 The H2 is practically standing on a class of its own. The only closest competitor is its sibling, the H2R. While H2 is street legal, H2R is meant only for track use. Both H2 and H2R looks identical from far, the only difference is the extreme horsepower that carries 300 horses on its rear wheel. The wing like side mirror on the H2 is replaced with a gurney flaps that contributes to down force generations.

Although H2R paintjob is similar to H2, the H2R is fitted with lightweight carbon fibre at most of its body. That explains why the H2R has a lower curb weight of 216kg compared to H2 238kg. 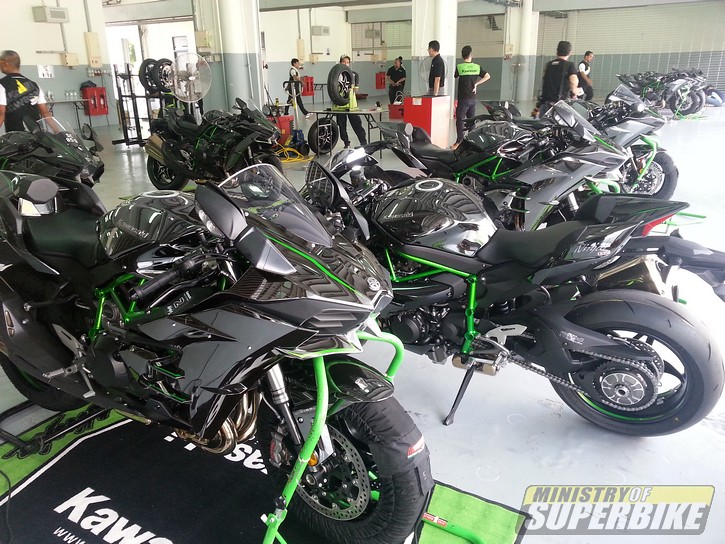 As usual, all the above facts and figure, anyone can easily get from Kawasaki brochure and internet. The fun part is my personal experience hopping on the H2 and takes it for a spin in Sepang F1 Circuit. Thanks to Kawasaki Malaysia for inviting Ministry Of Superbike for a media test ride. I had this golden opportunity to take the H2 for a spin. 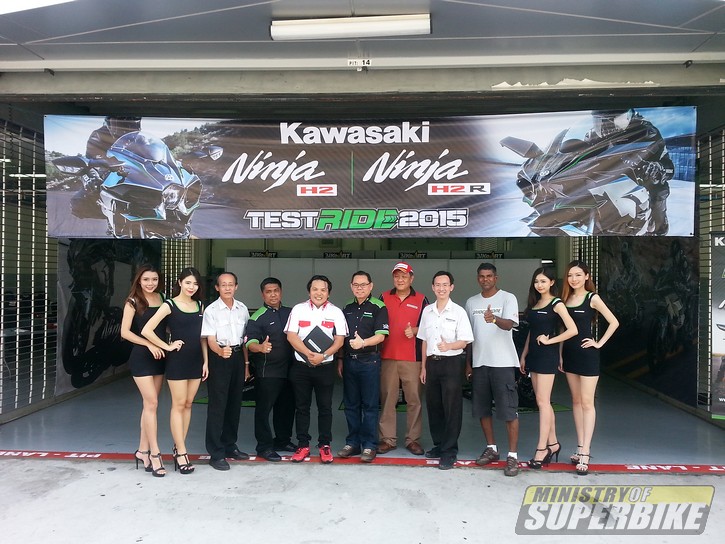 Although the H2/H2R overall look is very appealing to me, the only part I don’t quite like is the headlamp. Its looks like an odd looking lantern. Apart from that, everything is enough to make me stare at the bike for as long as I could. This is the moment of truth, what makes you turn your camera away from the hot leggy Kawasaki umbrella girls and focus your lenses on the bike? So far only H2/H2R managed to make me do that. The futuristic design, the brilliant paintjob, the hidden little red turbine under the tank; all of it. 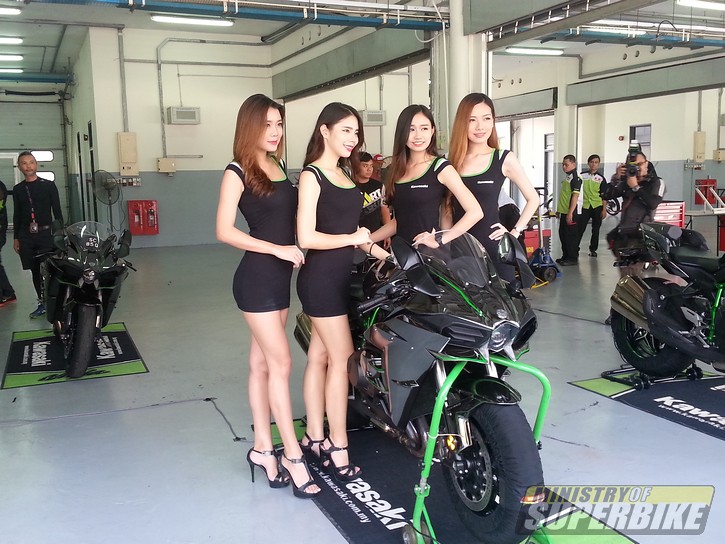 So I finally got myself on top of this legendary bike. Surprisingly, the seat is not that high as I can easily reach the floor. Although the facts shows it may be heavier than the ZX10R and the usual ZX-6R 636, but the it doesn’t feel heavy when you are on it.

On pit exit, I can’t really feed it with much fuel as it’s a warm up since I was given a brand new set of Bridgestone RS10. I don’t really mind as it gives me the opportunity to keep tab on it’s really fancy hybrid digital and analog dash display. We were escorted by Farid Badrul at the front on H2 and Hazlan with ZX10R at the rear. It is pretty much a very controlled run. But soon enough we understand why and the only reason is to keep us alive.

After 1 sighting lap to warm up the tire and to familiarize with the H2 potential, Hazlan gave me a green light to twist the throttle a little more. So here comes the fun part. The H2 delivers a very smooth acceleration and that is crucial especially during power out when exiting the turn. The Supercharged engine responded almost instantaneously without much lag. The power, I left my balls at turn 15 when I’m already at turn 1. The power is just too immensely insane. And at some point of time, you can hear the chirping sound of the turbine, that wouldn’t be possible once you change the rather quite OEM exhaust. 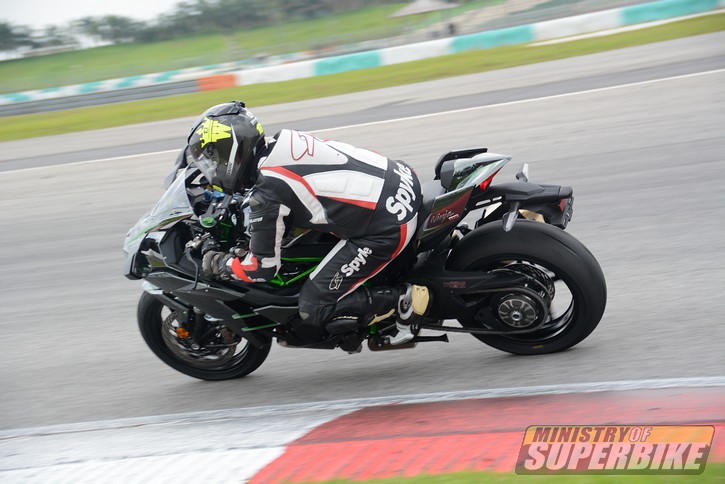 H2 is a little bulky from the naked eye if to compared with many other superbikes, but the trellis frame work’s its magic as the ride was solid and stable even when under intense braking pressure especially at turn 1 and turn 15. It handles amazingly well.

[quote style=”boxed” float=”right”]The power, I left my balls at turn 15 when I’m already at turn 1. The power is just too immensely insane.[/quote]

The state of the art KYB suspension provides excellent feedback with adequate control on throttle and during hard braking. The right combination of tires, tire pressure and suspension settings give the ultimate satisfaction and stability during the test ride. The aerodynamic of the bike works so well, especially when you don’t even realise that you are riding at 250kmph.

Handling wise, the H2 handles extremely well and I find it easy to ride, in fact I find it as agile as the Ninja ZX-6R 636 and 10R which I often ride. Or maybe I wasn’t going fast enough. The only setback or maybe a wise decision by Kawasaki is only to allow us riding on traction mode 3. The KTRC intervene at almost every corner, which although annoying but it’s the best way to keep one alive to ride further.

Unfortunately for me, time is running out and I missed out the opportunity to test ride the other sibling which I believe would be more intense. There are few media who managed to unleash the beast above 330kmph at the Kuala Lumpur Straight.

The H2 design is not just aesthetically pleasing to the eye, yet it is comfortable for the rider, especially short Asian rider like me.